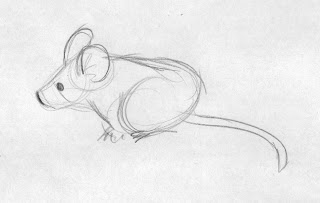 Posted by Lavalle Lee at 6:31 PM No comments:

Decided to study "The Rescuers" took out my drawing board and drew a few paused frames. 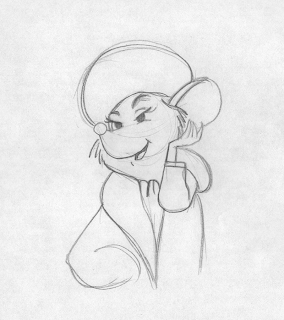 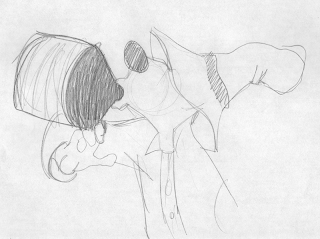 Posted by Lavalle Lee at 2:05 PM No comments:

This was my scene for the Cyber Garage Project run by Don Bluth. Finished this test Aug 5, 2009.

Posted by Lavalle Lee at 5:48 PM No comments:

One Last Group Shot at the Masterclass

Very sad it's over, but what an experience. It was great to meet and learn from Don Bluth. 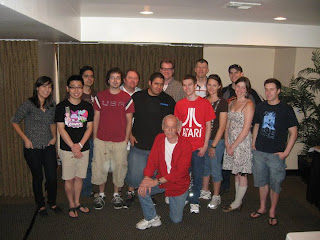 Posted by Lavalle Lee at 6:02 PM No comments:

Pictures from the Don Bluth Masterclass 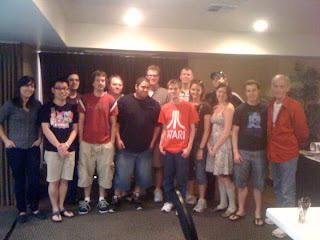 Here are a bunch more. 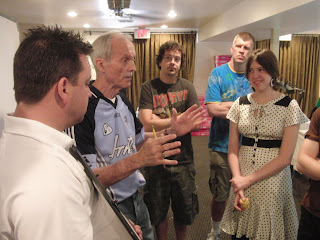 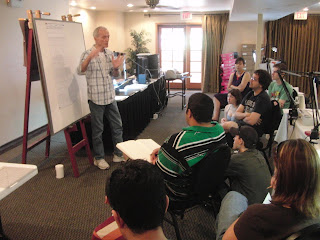 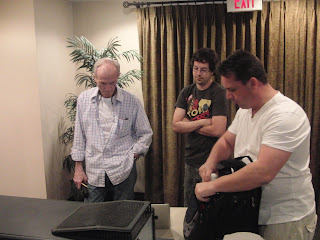 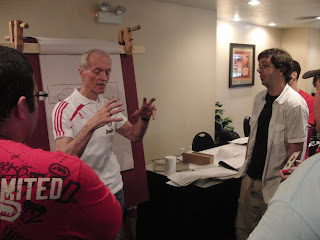 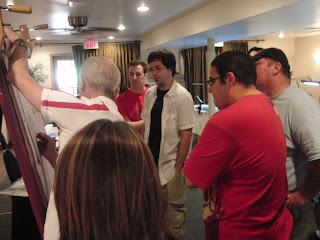 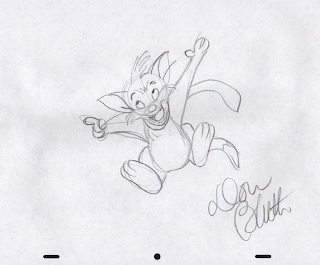 (I asked Don to draw me my favorite character from his movies. Banjo the Woodpile Cat!)

I just returned from the 1 week Animation Masterclass with Mr. Don Bluth. I must say WOW! I will write in here basically how the week went for me. :D

I arrived in Phoenix, Arizona on Sunday the 4th, and it was HOT! I think it was 110 degrees which is very sizzling, I could feel my skin burning from the sun. So after we got there we went to go pick up the rental car, and check into the hotel in Scottsdale.

But first we wanted to eat in Arizona, so we went to a indian restaurant (i love indian food). After that, went to go pick up Les (Disney Academy Teacher) and Keith (Warner Brothers Animator) Spent the rest of the night settling in and figuring out where the XONA resort is so the next morning I wouldn't get lost.

Les and I walk in and there is a short irish man and a tall guy, who ends up being Dave and Rodney. We all start pitching in helping Dave set up. Few hours go by (yes were were that early, I think 6am) Don Bluth walks in, right away I saw everyones faces light up and I look there he is! Quickly went up to shake his hand, and he said he remembers me from my video seminar questions! More and more people arrived and I got to meet the rest of the gang. Alexandria, Nate, Will, AJ, Felice, Janice, Owen, Seth, and Meredith. 13 students total in the masterclass.

Don expressed his thanks to us for coming to the masterclass and taking traditional animation serious. Which we all love. Once the bell rang (there was no bell, lol) Don started to lecture, and I thought to myself wow, i'm in a class learning from Don Bluth right in front of me!

After the awe settled, we all got down to work, and chose a scene to work on. There were 4 to choose from, which were all panning scenes. I chose one where the bird is taking off, flying and landing.

Don talked mostly about timing and music. He made sure we had a clear understanding of the xsheet. We spent the rest of the class working. We also were given reading material for homework.

Rest of the Days:

Each morning Don lectured, which helped for each day. Pumped us up for a long day of animating! I don't think I ever have drawn so much before. I was nervous to ask Don to autograph my book, but he said yes! (The Art of Animation Drawing)

When ever I had a problem with my drawing Don would draw over it! Just like he said he would! Watching him draw in person, really opened my eye to drawing. This upcoming week is going to be nothing BUT STUDY STUDY STUDY! I have a plan now.

Lets see what else! Sometimes a line would form to where Don set up to help us. Eventually we came up with a system so everyone would get time with Don, not just the ones who waited in the lines.

For the first 3 days Don had lunch with us at the Xona restaurant, but they were pretty expensive for the amount of food they actually give us. Don ate elsewhere the last few days.

On I think the 3rd (or 2nd) day a few of us went out to eat together. It was really cool to meet all of you and spend some time with you. I forgot the name of the place we ate, but it was a vietnamese cafe.

Basically the class played out like a real class, lecture in the mornings, work for the rest of the days. The atmosphere in the class was intense we all were working our hardest, doing things that were so new to us!

Most of the students came in dragging there feet, most stayed up to like 1am to 3am working. I went to bed again at 9pm, lol. Woke up 3am and worked, then got to the class. We were all scrambling to get as much as we could done on the last day. Most of us already shot pencil tests and got Don's critique and changes.

Dave did all the computer work on flipbook and got frustrated at flipbook a few times. Which was funny.

Gary Goldman came in the last day with signed posters and Banjo dvds. Most of us crowded him and Don while they signed the Banjo dvds. I already had a copy, but I wasn't going to pass up a signed copy for only $10 bucks!

When Gary came in I was by the computer shooting my pencil test and asked if he would check it out, he said. "What you are doing is more than we did in the first few months I was at Disney." I smiled and thanked him, then he gave me a little advice on my scene to give the bird more stretch. I quickly went back to my desk and worked on his suggestions and he was right! (Of coarse)

After Gary left everyone quickly went back to work, and Don went back to calling out our names to check our scenes.

I can tell you this, after this class I now have a very good understanding of timing and xsheets. The xsheet is a roadmap, all this time that I have been animating I would get lost, all i needed was directions.

I made sure before the end of the class, I would ask Don to draw me one of my favorite characters, BANJO! Today I plan to get it framed and its going on my wall.

Sadly the day was coming to an end, Don discussed how happy he was with us, and talked about future classes and the workshops. We all helped pack everything away, got a bunch of pictures (which will be online soon!)

Said our goodbyes and Don was gone. :(

Later that night we all went to Dave's bar (YES DAVE HAS A BAR!?!) It was really nice too in there, Dave gave us free appetizers and most of us ordered fish and chips. (For those of you who don't know who Dave is, he is Don Bluth's assistant, who is from Ireland and has a heavy Irish accent.)

Overall, I wouldn't give up this experience for anything. I am going to stop writing and get to drawing, today i'm going to study Freddy Moore. Nice to meet all of you in person, and I hope we do it again! There is more to write, but I am sure you all will fill in the gaps in your own topics!

Thanks again Mr. Bluth for this experience. Don's Club

Without further adieu, the completed Vinnie 'the chik' Costello cartoon! Started working on this back in February. Longest I ever took making a short, I hope you all like it. :)
Posted by Lavalle Lee at 8:32 AM No comments: